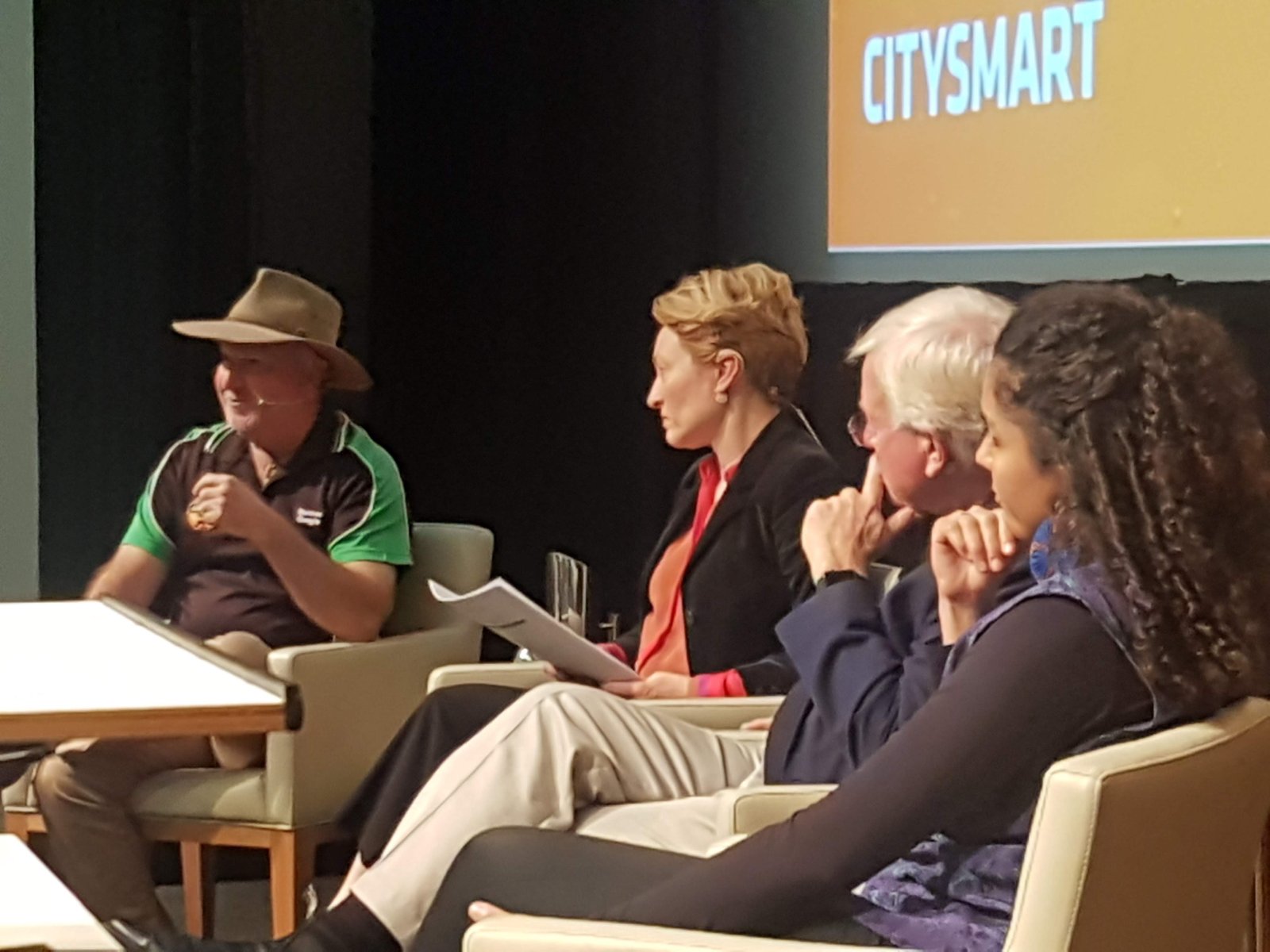 Questions from students and millennials went unanswered last night at the first of the Climate Week Speakers Series held by CitySmart at the State Library in South Brisbane last night (Tuesday).

Questions from students and millennials went unanswered last night at the first of the Climate Week Speakers Series held by CitySmart at the State Library in South Brisbane last night (Tuesday).

“How can you maintain hope in the face of the Climate Emergency when it is clear that the general public really does not care?” came the earnest plea from a young woman after articulately the outlining the causes for despair.

“What is the intersection between recycling and climate change?” asked one twelve year-old, whose primary education obviously extends includes an understanding of the issues beyond the majority of panellists on the stage. Certainly they failed to come close to interpreting the question, let alone answering it. “Embedded energy,” would have been a good start, as long as it was followed by a sensible and straightforward explanation.

It was a far cry from what we got, however. Angela Heck of CitySmart did a good job of introducing the guests and managing the panel but she had her work cut out.

Farmer Gregie from 4 Real Milk has made a name for himself on breakfast television with his colloquial language, his upside down milk bottle trick (in which the cream on the unhomogenised milk keeps the milk in the bottle) and his heartfelt pleas for consumers to consider the plight of farmers. His rhetoric is not up to the job of considering the difficult issues at hand, though, and he manages to terribly mangle the facts on regenerative farming and carbon sequestration, which is a pity as he is making a valid point. The underlying current of climate denial does not help, though it probably explains his popularity on free-to-air TV.

Professor Roy Tasker from Planet Ark presented an overview of DrawDown, Paul Hawken’s roadmap for energy descent aimed at governments and community leaders. He crossed horns with farmer Gregie by pointing to the facts on global meat production and climate change, while conceding that industrial harming produces most pollution as well as harming animals and the local environment. That he did not acknowledge the important role of animals in regenerative farming is partly due to the complexity of the issue and partly due to the mess that Farmer Gregie had already made of the topic.

Tasker also forgot to stress the importance of getting the plans in DrawDown into the hands of our rulers, simply asserting that it is time to act and telling the assembled and experienced activists to write letters and use social media to enhance their activism. That promotion of clicktivism grated on the many climate activists in the room who have been on the barricades for decades and are looking for real messages of hope in what is a frightening and truly dire situation. When two women in their twenties seriously question the value of procreation due to failure to act on this major challenge we need stronger action than facebook is able to provide.

Unfortunately, he presented an over-simplistic view of smart electricity meters and completely failed to explain their role in building a more flexible electricity network. He also struggled to answer the most basic questions about the energy balance in a domestic home, the role of biogas, and the embedded energy in a solar panel.

Sabrina Chakori more than made up for the lack of brain power in her male companions and presented a lightning walk through the research she has done toward her PhD. She is studying and running a volunteer not for profit Tool Library at the Queensland State Library because she has drawn the conclusion that we need to reconsider the role of growth if we are going to solve the problem of living on a planet with finite resources and a growing population.

She reminded the panel more than once that recycling consumes resources and corrupts materials (see our piece Recycling is just rubbish) and that we cannot consume our way out of the climate crisis and social injustice. Unfortunately, her questioning of the role of economic growth is not going to get her a seat opposite David Koch and so breakfast viewers will continue to see the likes of farmer Gregie assert that volcanoes produce more greenhouse gas than humans instead of an anything approaching reasonable analysis.

Despite my bitching and moaning, CitySmart has done a great job of crafting a panel and thus an event that has both public appeal and generates real discussion. It is just that, like the un-named millennial with whom I opened the article, I cannot help but despair at what appeals to the public.